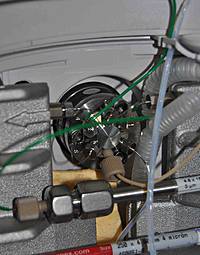 Ionic chromatography coupled with conductivity detector allow the analysis of ionic species which, by nature, dissociate into their consituent ionic components when dissolved into a solvent with a high dielectric constant.

Conductivity detectors measure the electric current between two electrodes of opposite polarity. They are located immediately after the stationary phase of the LC column (with or without suppressor) to detect compounds as they elute from the column.

The different modes of ionic chromatography (anion exchange, cation exchange and ion exclusion) simply relate to the different types of column used to achieve the separation of the ions.

The presence of an analyte gives a response assumed to be proportional to the concentration. The instrument’s response to the analyte in the unknown should be compared with the response to a standard.

It is important for us to promote a positive image as a socially responsible company and efficient partner, contributing positively to society and reguloratory affairs management.
Download GLP certificate
Download French CIR agreement